*Promotion is subject to availability, may not be combinable with certain fares or other amenity offers, is capacity controlled and may be withdrawn at any time. Other restrictions apply.

READY TO PLAN YOUR SHORE EXCURSIONS?

This tropical city of over two million people spreads out along the banks of chocolate-colored Guayas River, about 12 miles from Gulf of Guayaquil. The river, navigable for the largest of ocean vessels, makes this one of the Pacific's most important and best-protected ports. Visitors find the city itself is primarily valued as a gateway for the Galapagos Island and the rest of the country. Ecuador's scenic capital Quito can be reached via a 45-minute flight from Guayaquil. Lush green hillsides, snow-capped volcano cones and brilliant sunshine combine to make the city a charming surprise. Guayaquil offers a rich and interesting history. The meeting of Bolivar and San Martin is commemorated with the colonnaded La Rotunda facing the river. Other attractions include Colon Park where the city was founded, the Santo Domingo Church and the cemetery, often called the White City. With its elaborate tombs and monuments, this is one of South America's most striking burial grounds.

This is the port for Trujillo, the "Lordly City," whose elegant mansions and churches reflect the aristocracy of the Spanish colonial era. Here you may opt for a thrilling excursion to Chan-Chan, an immense and magnificent enclave that since A.D. 1300 has been the center of the sophisticated Chim culture.

Callao is the port of Lima, located six miles from the city center. Among Callao’s attractions is the Real Felipe, a colonial-style fortress built in the 18th century to defend Lima from English and Dutch buccaneers.
Today, a visit to Lima may serve as a unique Peruvian experience that offers a glimpse into the Andean world, Spanish tradition and the country’s modern aspects.

The Gold Museum of Lima (4 hours)

Pachacamac and the Paso Horses (8 hours)

The Paracas Bay is best known for the area known as "The Galapagos of Peru" or the Ballestas Islands Wildlife Reserve. The sea bird colonies and marine mammals that inhabit these barren and desolate islands are some of the most spectacular in the world, including the Guanay, Red-legged and Neotropic Cormorants, the Peruvian and Blue-footed Boobies, the Peruvian Pelican, several species of tern and gulls, including the Inca Tern, and several species of petrel. There are also breeding grounds of South American fur seals and sea lion as well as a small colony of Humboldt penguins. Other interesting wildlife less frequently seen on trips to the Ballestas includes sea turtles and albatross. On the way to Ballestas, you will be able to see the candelabra in the coastal sand dunes - one of the many giant petroglyphs that dot the landscape.

This seaside oasis among golden sand dunes is Chile's northernmost gateway; it is also a rapidly developing resort. Located just 30 miles from the border of Peru and linked to Bolivia by land and air, Arica enjoys an interesting cultural exchange. The city lies at the foot of the Morro headland, with the Andes as a distant backdrop. A mild climate, with year-round temperatures of 70-75 degrees, gardens and parks brimming with luxuriant flora have earned Arica the name "City of Eternal Spring." Arica's most prominent site is the Morro, rising steeply above the city. It was the scene of a great victory by Chile over Peru in the War of the Pacific on June 7, 1880. At the foot of the Morro is the Plaza Colon with the cathedral of San Marcos, built in iron by Gustave Eiffel. He also designed the nearby Customs House.

Being the major attraction of the second region Antafogasta is a city with much tradition.

This area/region is also blessed with the clearest skies in the world, with no more then 20 cloudy days in a year, and therefore home to many observatories with some of the world's largest telescopes.

Of the places interesting to see, the Barrio Historico stands out. There you can visit the Muelle Salitrero, a national monument built in 1872 by the Melbourne Clarc Co.. This pier was where they loaded the saltpeter for shipping to other parts of the world. It also served during the Pacific War as a place to embark and disembark Chilean soldiers.

Another place that should be visited by visitors is the Centro Urbano (downtown center), with the Plaza Colon surrounded by big old trees. There is also the Torre del Reloj (clock tower), which is a small replica of Big Ben in London and also a national monument.

Alongside this is the Quiosco de la Oquesta, where different choirs traditionally meet to play for the public. In the Plaza Colon there is also a gothic styled Cathedral with many stained glass windows. Along one side of the church is the Teatro Municipal (Municipal theater), recently constructed and that intends to become a stop for well known artists.

Another interesting building of Antofagasta is the Ruina de Huanchaca, a silver foundry, constructed in 1873.

As far as natural attractions are concerned, be sure to pay a visit to the coast to admire the fascinating rock formations there.

The island can be reached by boat from Caleta on the mainland. However, passengers are not allowed to exit the boat and go ashore. The island is home to a colony of Humboldt Penguins, which use the is and as a breeding ground.  Other mammals include the Culpeo Fox, Chilla Fox and European Hare. The shoreline area is home to marine mammals, as are the Marine Otter and the South American Sea Lion.

Coquimbo is near the northern port city of La Serena and one of Chile’s regional capitals. It lies between the Atacama Desert and the central valley, rich in agriculture and is an important distribution center for fruit from the Elqui Valley. Some of the elaborate woodwork handcrafted on the buildings here by early British and American settlers still remains and these wooden buildings are among Chile’s most interesting historical structures. From here you can visit the resort town of La Serena (cathedral and churches), the mountain-topTololo Observatory and the Elqui Valley.

Santiago, with over four million people, is the fifth-largest city in South America. Standing in a wide plain 1,800 feet above sea level, Santiago boasts a beautiful setting. Snow-capped peaks of the Andes chain provide a dramatic backdrop. Tastefully laid-out public gardens contribute to the beauty of the city. However, Santiago also suffers from horrendous traffic and a high percentage of pollution. The heart of Santiago is the Plaza de Armas, flanked by the cathedral, the archbishop’s palace, the National History Museum and fine arcaded buildings lined with shops. The two-mile-long Avenida O’Higgins is the major thoroughfare, commonly known as the Alameda. There is a splendid view over the city from San Cristobal Hill, crowned by the statue of the Virgin Mary.

Valparaiso: Encounter with the Art - 4 hours

Valparaiso - Wines of the Casablanca Valley 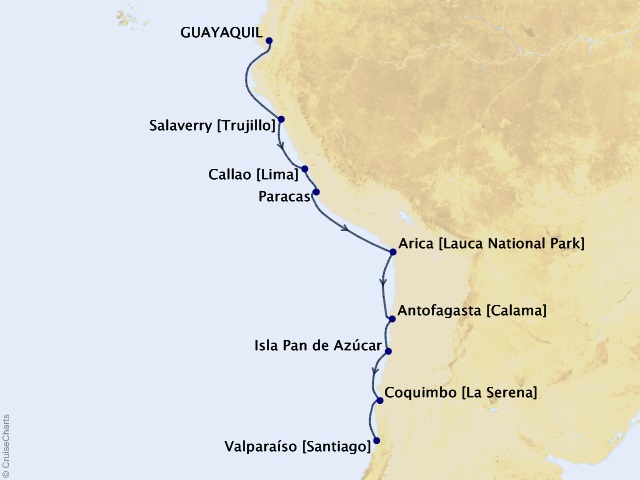 Itinerary subject to change without notice. Please confirm itinerary at time of booking.

Departure Date:
11/7/2022
Number of Nights
11
Cruise Inclusions:
Remarks:
Cruise Only Fares are in US dollars, per person, based on double occupancy.

All fares are quoted in US Dollars.

All prices per person and in USD unless otherwise stated.
Offer ID:
1404910

Reference this number when contacting our agency so we may better serve you. Also keeping this number handy will allow you to locate this document again quickly.

Information and pricing is subject to change without notice. While we do our very best to ensure that information and pricing appearing in this website is complete and accurate, we cannot be responsible for incomplete and inaccurate representations, which may or may not be under our control. In the event of a pricing error, misrepresentation or omission, we reserve the right to adjust the pricing or make any other corrections.

Holiday Cruises and Tours of Scottsdale

Holiday Cruises and Tours of Arvada

Holiday Cruises and Tours of Portland