Astoria is a city of 10,000 people on the Columbia River, just a few miles from the Pacific Ocean. It is surrounded by the beauty of the forest, mountains, 3 rivers and the sea. Astoria is part of a nationally significant historic region at the western end of the Lewis & Clark Trail. Astoria is the oldest American settlement west of the Rockies; a place that takes visitors back to simpler times, its architecture dominated by hundreds of Victorian homes clinging to steep wooded hillsides and with a revitalized 1920s era downtown; all set against a backdrop of tremendous natural beauty. Unspoiled and generally uncrowded, Astoria is near several first-class interpretive attractions including Fort Clatsop, the Columbia River Maritime Museum, the Flavel House, Fort Stevens State Park, the Astoria Riverfront Trolley and the Astoria Column. Because of its steep hills and beautiful Victorian homes, Astoria has been called the "Little San Francisco of the Pacific Northwest."

The Dalles
7/13/2022
7/13/2022
Located at the northern border of Oregon, on the banks of the Columbian River, The Dalles was a major Native American trading center for thousands of years.  The Fort Dalles Museum, housed in the only remaining building from the mid-19th century military outpost, features a collection of military artifacts, household goods and old medical equipment from the early days of the city. Recreational activities in The Dalles include river rafting, fishing and camping.  Windsurfing is also a very popular pastime in The Dalles and the area has gained a reputation as one of the best places to learn and practice the sport.
Richland
7/14/2022
7/14/2022

Pendleton is a quaint town settled on the Umatilla River in the sprawling landscape of Eastern Oregon. Learn about the history of Pendleton at the Heritage Station Museum or the Tamstlikt Cultural Institute, where the history of the Cayuse, Umatilla and Walla Walla Native tribes are explored. In Pendleton's picturesque historic district, tour old Pendleton - the Empire Building (1907), Hendricks Building (1897) and the Empire Meat Company from 1895. Pendleton is known for its woolen manufacturing, and you can get a first hand look at the Pendleton Mills. Nearby, explore the Umatilla National Forest or the Wallowa-Whitman National Forest.

Snake River
7/15/2022
7/15/2022
The Snake River, a major river in the Pacific Northeast, originates in Yellowstone National Park, Wyoming, at 9,500 feet. It joins the Columbia River near Pasco, Washington, 1,036 miles from its source. It is the largest tributary of the Columbia River. The River is important in American history and was originally named for Meriwether Lewis  who was the first of the Lewis and Clark Expedition to sight the river in 1805.
Clarkston
7/16/2022
7/16/2022

Clarkston is the gateway to Hells Canyon. Take a professionally guided jet boat tour of Hells Canyon, raft the Snake River, paddle a canoe down the Clearwater River on the historic Lewis & Clark Trail, rent your own jetboat, or try your hand at some of the best fishing in the Northwest! Follow the footsteps of Lewis and Clark, learn about the history of the Nez Perce Native American Indians, explore museums full of pioneering history and exhibits, or view bronze sculptures and paintings at local galleries. It is located within easy reach of Lewis-Clark Valley - which offers a wide variety of activities. 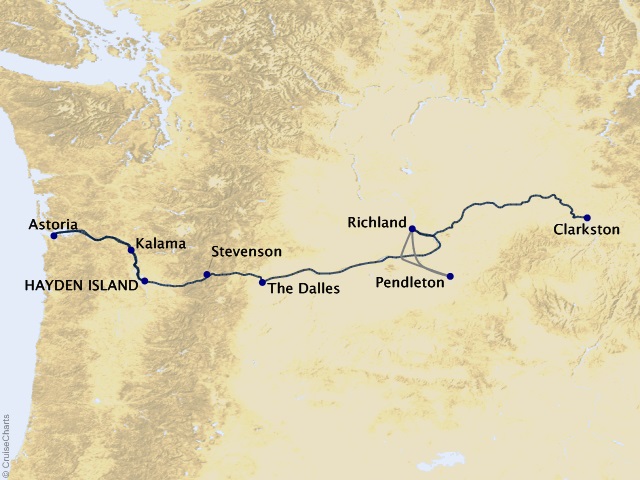 Itinerary subject to change without notice. Please confirm itinerary at time of booking.

Departure Date:
7/9/2022
Number of Nights
7
Cruise Inclusions:
Remarks:
Prices are per person based on double occupancy. Pricing on some sailings may reflect special limited time offers, not combinable with any other offers/discounts. Valid on new bookings only.

All fares are quoted in US Dollars.

All prices per person and in USD unless otherwise stated.
Offer ID:
1380412

Reference this number when contacting our agency so we may better serve you. Also keeping this number handy will allow you to locate this document again quickly.

Information and pricing is subject to change without notice. While we do our very best to ensure that information and pricing appearing in this website is complete and accurate, we cannot be responsible for incomplete and inaccurate representations, which may or may not be under our control. In the event of a pricing error, misrepresentation or omission, we reserve the right to adjust the pricing or make any other corrections.

Holiday Cruises and Tours of Scottsdale

Holiday Cruises and Tours of Arvada

Holiday Cruises and Tours of Portland